Spring for SydLUG started with a 2 day pop-culture event at the University of Sydney.

Following was Ryde Brick Fair on September 15th being held for its 2nd year.

The event was again well supported by its local community with 30 entries in the kids building competition and attracting over 2000 attendees with all funds raised going to Ryde East Public School P&C.

Featuring over 100 MOCs from detailed dioramas to mosaics to unique mash-ups to scale model vehicles, it was a weekend of great family entertainment to start off the school holidays.

This event was only possible with the generous support of Crossroads Homemaker Centre and we thank them for this opportunity.

The inaugural Engadine Brick Fair was held at St John Bosco Primary School, Engadine on Saturday June 24th.
The event was well supported by locals, attracting a crowd of one thousand, mostly young families with a developing interest in the hobby. There was over 40 entries in the kids building competition, winners judged by SydLUG members, who had a challenging time wading through some very talented builds. Special thanks goes to the contributing members of SydLUG (and their families in support) for making this event possible, some members travelling all the way from Gosford, Penrith, Campbelltown, and Wollongong just for the day, and also special thanks to the parents of the school for making the day run smoothly and for providing a myriad of sweet treats.
We hope to be back next year with more MOCs and bigger MOCs. Once again, dozens of parent volunteers assisted on the cold winter’s day entertaining approximately 2,500 members of the public and school community. The school P&C continues to be extremely grateful for the kind support of SydLUG and SYDBricks Incorporated. After another successful show the school community is again hoping this will become and remain a popular annual event. Many parents have spoken fondly of seeing their children inspired to build, and in some cases, save pocket-money to purchase something from our friendly retailers. Other activities such as jumping castles & face-painting complimented the “Brick Pit” and this year the addition of the 5 Minute Speed Build area proved to be popular. The weather was kind (no rain, just a chilly breeze), the enthusiasm obvious and the feedback from exhibitors, school and parents alike was unanimous. Over the June long weekend 5 members of SydLUG attended the 36th Epping Model railway exhibition which saw thousands of people through the door. The SydLUG LEGO city display was a popular display among all who attended even the seasoned expert scale railway modellers. Extra attention to detail was taken this year with every section of the train track ballasted and a working locomotive turntable. 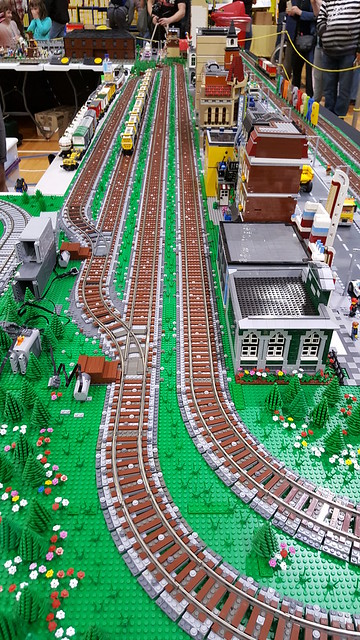 The layout also included automatic point’s controller by a tablet via the use of sbrick’s. With the use of the sbrick we had 5 points, 2 locos and the turntable all controlled via the tablet and it worked seamlessly over the weekend, and is something that we are going to consider more for future shows. 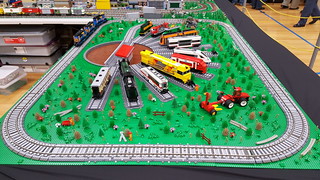 Various locomotives and rolling stock were run, which pleased not only the crowd but the attending members also. A new addition to the locomotive ranks this year was the QR National 6022 built in 8 studs wide rather than the standard LEGO scale of 6 wide. Late on Monday afternoon just before pack up, we decided to try some train drifting with the new QR National 6022 Locomotive. It was fantastic, people from other displays came to watch and have a laugh. 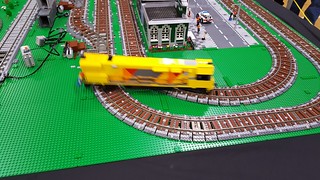 The display included a number of different buildings ranging from sets, to modifications or sets and a large number of custom builds, it even had a star wars stage show.

We hope to be back next year with a bigger and better display. 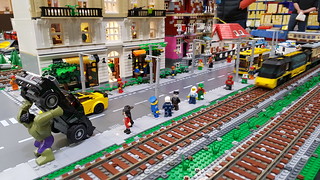 The Sydney Brick Show took place in the Sydney Town Hall on the 22 and 23 April and was once more supported by many SydLUG members. The show received thousands of visitors over the two days, raising much needed funds for Bear Cottage, who provide support for the families of children suffering terminal or life-limiting illnesses. Just under 100 exhibitors took part in this year’s show, from experienced show veterans to first-time exhibitors. The creations on display were representative of a wide variety of building styles and LEGO themes and the visiting public was treated to an inspiring display of talent, creativity, imagination and dedication. Highlights included the massive X-Men Sentinel; Mack from Cars complete with chromed LEGO pieces; a portal collaboration spanning four themes; a huge fairground and city display; a detailed house from the Fallout 4 video game and a replica of Victoria’s Government House. Once again, the winners of the Kids Creation Comp displayed their builds at the show and were excited to be among grownups who share their passion. This year’s show also featured a display of the Star Wars Ultimate Collectors Series, complete with a backdrop of twinkling stars and an impressive array of LEGO Minifig habitats that rewarded close viewing with clever details that made many laugh out loud. The show catered for visitors of all ages, offering children’s building tables and a Duplo pit in addition to a LEGO RC track that proved quite a hit with the crowds. On the 26th June, approximately 22 SydLUG exhibitors, dozens of parent volunteers and in excess of 2,500 members of the public converged on the Croydon Public School for the inaugural Inner West Brick Fair. Held to raise funds for the school P&C, the event was a huge success and very-much appreciated by the school community. 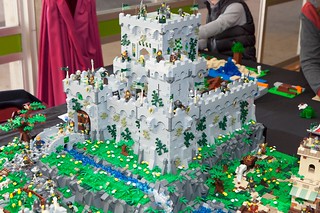 The extensive participation of club members displaying a wide range of MOCs was a highlight for the local community many of which had not experienced a LUG event previously. A range of activities for the kids combined with a beautiful sunny winter day and plenty of food on offer meant there was something for everyone. The feedback from exhibitors, the school and the general community has been extremely positive and it is hoped the event can become a regular part of the school calendar. 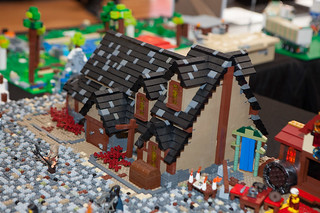 Photos of the event can be found here

Members from SydLUG attended Brickvention in Melbourne this year between the 15th and 17th of January.
It was held again at the Royal Exhibition building in Carlton, which is a fantastic venue with lots of space and natural light.
There were over 400 exhibitors in attendance, and 26000 members of the public attended on the 2 public days.
The Friday was convention day where games were played, talks listened to and prizes awarded. The guest speaker this year was Warren Elsmore who is an author and Lego builder form the UK. There was alarge variety of retailers who were selling new and used sets and minifigures. Many rare and out of production sets were available, with price tags to match! Some of the highlights were Ryan Mcnaughts sinking RMS Titanic and BAC Concorde cross section. More photos can be found here

On Sunday 8th November 2015, SydLUG was again invited to participate at the St George Brickfair held at Hurstville South Public School. The Brickfair was being organised by the school’s P&C to raise funds for the school. There were two areas at the school for the Brickfair. In one building, a display of UCS Star Wars models with other assorted large Lego sets. Right beside it was a very popular brick play area for the kids to build their own creation. The School Hall housed the exhibition of SydLUG members. The displays included things such as a Cinderella Castle, Star Wars Mos Eisley diorama, Ninjago & Scooby Doo scenes. Also custom & MOC Lego car creations, a MOC of Sydney’s Town Hall Station and helicopters galore. Lego Friends sets were displayed as well as other Lego creations. The centre piece was the large Lego City Town Centre with lots of buildings both custom and out of the box. Zipping around the Town Centre were trains that entertained the crowd both young and old. The crowd favourite was the Great Ball Contraption, it was a number of different moving Lego machines that picked up, tipped out, shuffled and span Lego balls from one side of the tables to the other.

It was a great day for all of the exhibitors and those that attended, lots of smiling faces were seen as they went from table to table.

Star Wars household. Have most of the SW lego sets (to go with thousand and thousands of Hasbro action figures!) and buy anything Star Wars related! Mainly collecting and smaller MOC, depending on the time and space at home!

Lego was one of my favourite childhood toys. After several false starts throughout my adulthood dark ages, I finally got back into Lego in 2012. I joined SydLUG in 2013 to broaden my AFOL horizons, and broadened they have

My favourite way of building is with ‘multi-set MOCs’ – buying two or more of the same set and making larger versions.