April has always been a month of family fun events for SydLUG with Easter and holiday celebrations to be part of – 2019 was no exception! We kicked off with an Easter Family Night at Kingsgrove Bunnings store on April 11th. MOC highlights included a brick-built version of an actual Bunnings store; Minecraft chickens with Easter eggs; an Easter Bunny maxifig and cube apartment creations. The event was well-attended by families who enjoyed the other activities on offer including slot cars; video games; clown heads; a jumping castle; crafts and face painting. SydLUG will return to Bunnings for a Mother’s Day family night on May 9th.

SydLUG helped herald the end of the school holidays by appearing at Figtree Anglican Church Fun Day, on April 29th. The MOCs on display were a highlight of the event which had a LEGO® theme.

Over 30 members of SydLUG also joined members of other LUGs to display at the Sydney Brick Show held on the weekend of 6-7th April in Penrith. Three members were among the show’s award recipients:

‘Outstanding MOC’ – Nigel for his impressive creation Watchtower at Daggerford 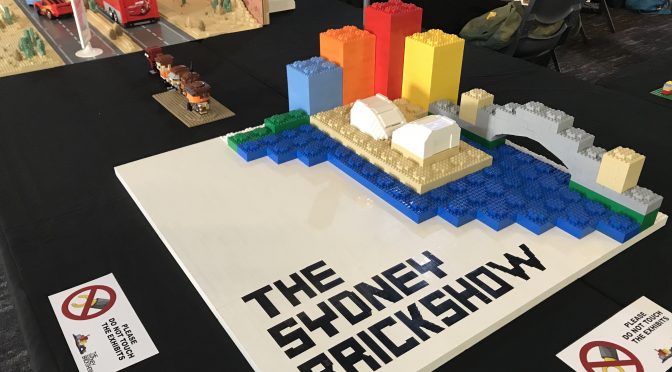 SydLUG members were among the exhibitors at the recent Sydney Brick Show (April 21-22), Sydney’s premier LEGO fan event. Over 100 displays were presented over two days to more than 5000 visitors to the show.

Prior to the show SydLUG members set the goal of beating the world record for the most Minifig habitats displayed (1090). For the uninitiated, a minifig is what we call a LEGO person/character and the habitat is a diorama or vignette contained within an 8 x 8 stud baseplate. The habitats were oozing with creativity, humour and clever techniques and parts usage, and an excellent inspiration for those wanting to have a go at building something of their own.

37 members, with the help of some non-SydLUG exhibitors,  smashed the record out of the park, with a total of 1547 habitats being displayed in an impressive wall configuration. A fitting celebration of the Minifig’s 40th anniversary this year. Another of the highlights of the show this year was a massive galactic frontier themed collaboration (5 x 2 metres) showcasing the work of 12 members of the Sydney LEGO User Group. The show’s mascot, an innocent spaceman named Apollo, found himself on a distant world where a rare ore named LEGOtonium had been discovered. It was a tough frontier world with all manner of aliens trying to discover their own plot of LEGOtonium. Creativity and humour collided in this amazing display that included ‘Bacon City’ – the city corner where heroes and scum ‘meat’ over the infamous outer rim wings and space hotdogs. SydLUG members were among the major award winners at this year’s show, ‘Best in Show’ going to SydLUG husband and wife team, Gavin and Samantha, who created a detailed city themed moc – ‘All Star Arena Precinct’, comprising a huge arena, church, playground, park, tennis courts, brick-built roads and modular style buildings. Over 400 minifigs were used to bring the scene alive and the arena was left open at the back to showcase the ice rink where ‘Disney on Ice’ was taking place. Four unique sets for the show were changed out every fifteen minutes and proved a crowd favourite. The ‘AFOL’s Choice’ was an impressive moc of the Singaporean apartment complex, The Interlace, by SydLUG builder, Graham. Built using around 95,000 pieces and taking 10 months to complete, the creation is a beautiful example of an architectural style build in microscale. Another SydLUG award recipient was Bradley, with ‘Foster’s Carnival’, which was Highly Commended. The moving parts carnival rides were amazingly life-like, down to the trucks built for them to be ‘transported’ on. SydLUG member, Joel, was recognised for ‘Creative Use of Parts’ for his display, ‘Under a Black Sun’, which was set up in a tent with special UV lighting shining on trans LEGO creations to produce a mind-blowing effect. Notable Mentions were given to SydLUGgers, Richard and Melissa for their ‘Pirate Cove’ moc; Rohan for his ‘Beatles Turntable’; Kristie for her Beatles mosaic and Michelle, for her mosaic of ‘The Ode.’

All displays were well-received by the crowd and exhibitors had a very positive show experience, sharing their passion and hard work with the community and catching up with each other to talk bricks and pieces.

On Wednesday 18 April, members of SydLUG visited Auburn Library to give kids in Western Sydney a taste of what the big Sydney Brick Show has to offer. 200 minifig habitats were on display, a small portion of the over 1500 that were made by Sydney Brick Show exhibitors to beat the world record for the most displayed.

Around 400 children enjoyed the display at the library, searching the habitats thoroughly for their favourite characters in LEGO. Inspired to build their own creations, the brick play pit was packed all day with kids searching for free space in the library to build, build, build! SydLUG is proud to be forging a positive partnership with Sydney libraries, joining forces to expand young minds and encourage creative and imaginative play. Many of the young visitors on the day were excited to find that the Sydney Brick Show was coming to a venue near them that weekend. In under a month Penrith Panthers Pavilion will host Sydney’s largest LEGO fan event, the Sydney Brick Show. On Sunday 17 March, members of SydLUG took part in the Annual Penrith CBD Festival to give the locals a taste of what to expect this school holidays.

Sydney Brick Show was featured in the grand parade at midday, showcasing local community and leisure groups, with the LEGO themed float proving a crowd highlight. Homemade brick costumes inspired by the upcoming collectible minifigure series were the envy of many kids in the crowd, and everyone was excited to see LEGO Deadpool and his friends Captain America and Harley Quinn emerging from a giant cardboard brick-built castle. LUG members also manned a small market stall with information about the upcoming show and some new and popular brick-built displays that had festival goers excited to experience everything that the Sydney Brick Show has to offer.

Tickets for the show are on sale now!

SydLUG kicked off its first meeting for 2018 by combining it with a mini exhibition for Cumberland Libraries. The group took the opportunity to catch up at the Merrylands Central Library on Sunday 28 January and display some of their recent builds for the local community as the school holidays drew to a close. Around 300 visitors to the exhibition were excited to see what the group’s AFOL builders could do. Visiting children were also treated to a free building workshop presented by SydLUG member, Pete White. The afternoon was a great success, with many young builders being inspired to enter the upcoming Kids Creation Competition run by the Sydney Brick Show. The show will take place in the April school holidays, April 21-22 at the new venue of Penrith Panthers Pavilion. SydLUG President, Gavin Rich, said library shows are a great way to reintroduce the community to both LEGO and what their local library offers.

“Lots of people don’t know what their local library has to offer, which is so much more than books these days. Libraries are a real community learning hub and hobbies like LEGO, with so much to offer in terms of creativity, problem solving, strategy and design skills, fits right into this space”. More shows are planned with Cumberland Libraries this year and a larger show with Blacktown Library in the July school holidays.